What a fantastic morning it was getting to perform at the historical launch site site Cape Canaveral.  The Shark Tank venue provided an intimate space to share some enjoyable laughs with many of our finest Airmen and Civilians.  Thank you not only to Command Chief King and Colonel Lang for your leadership and support but the many attendees who filled the room and my heart.  Your service will forever be appreciated. 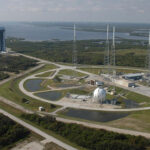 About the Author: Melissa McGrenaghan