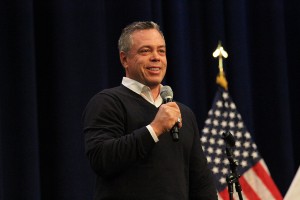 Bernie McGrenahan is a stand-up comedian who loves our military.  Having appeared on many late night television comedy specials and opened  Las Vegas concerts for today’s biggest stars, the news- media is now covering Bernie for his dedication and care for our Military forces.   Bernie’s Comedy ‘With a Prevention Message’ Tour is inspiring our troops to stay focused and resilient through his empowering personal life testimony.  Air Force, Army, Navy, Marines, Guard and Reserves are all on board with the once in a lifetime training experience!

Bernie has found the missing ‘hook’ in Safety Briefs, Stand Downs, All Hands Calls, and mandated Alcohol, Drug, Suicide Prevention Trainings:   A comedian to ‘break the ice’ with our amazing troops  followed by ‘PERSONAL TESTIMONY’ on Bernie’s  experiences with alcohol and substance-abuse.  Bernie tackles his  conduct under the influence of alcohol, and  the surviving of his nineteen year old brother Scott’s suicide.  ‘Comedy is the Cure’ is the original  Comedy ‘Followed by a Prevention Message’ program and is the United States Military’s top-requested prevention and risk-reduction program. This fresh,  innovative form of EDU-TAINMENT is bringing our troops and civilians to their feet with applause and appreciation!

PART ONE of the Program: A Stand-Up Comedy Show

Let’s be honest: Prevention and Risk-Reduction Briefs are not an easy session to sell to our Service members, especially when mandated to attend. We are always looking for a fresh angle or approach to maintain our target audiences’ attention,  to not only keep them  interested, but send our troops out with tools and information to better prepare them for mental fitness in their personal and professional lives. Here is why ‘Comedy is the Cure’ is doing just that:  Bernie opens the brief with a hysterical 30-minute comedy show which not only entertains, but more importantly ‘gains the trust and respect’ of service members and civilians. Everyone enjoys a good laugh.  PowerPoint, Statistical Charts and Videos are each important educational tools, but Bernie instead uses his ‘humor’ to set up the serious Training-Session which follows: A powerful and gripping message on the Dangers of Alcohol and Drugs when used to cope with stress.

“Why “Comedy is the Cure’ is a ‘Sole-Source’ program… changing and saving lives!”

PART TWO of the Program:Personal Knowledge and Testimony

Once relaxed and entertained through humor, Bernie grips the audiences’ attention by revealing his step by step downward spiral into the world of high-risk drinking and drug abuse. The alcohol and drug related suicide of Bernie’s younger 19 yr old brother Scott would eventually compound Bernie’s drinking and reckless behavior. Three DUI arrests later, at the age of 26 Bernie served a six-month sentence in Los Angeles County.  After deciding to ‘use his resources’ ( chaplains and counselors)  for help, Bernie is now 26-years free from alcohol & drugs. Bernie is committed to motivating service members to identify the warning signs of alcohol and drug dependency including PTSD related usage.  Through identifying with Bernie’s story, troops are being motivated to take action by seeking Treatment before a career, marriage or life is lost. Bernie is breaking the stigma that ‘asking for help’ is a sign of weakness and claiming the opposite: ASKING for HELP is a sign of COURAGE! While 98% of those in uniform are focused and mission ready,   The therapeutic value of one problem drinker, speaking to another, is without parallel.   Bernie is inspiring servicemen to be prepared, resilient and ready to defend the Safety of our Nation!

RESILIENCY is available and within REACH for us all!

COMEDY is the CURE  is the FRESHEST & HOTTEST approach to ALL PREVENTION & SAFETY TRAININGS! ENTERTAINING, EDUCATIONAL and INSPIRATIONAL!

Bernie is NOT a comedian joking about serious issues and topics. ‘Comedy is the Cure’ is a comedy-show first, followed by a powerful and serious Training & Prevention-based session.

Please click to visit our LETTERS AND REFERRALS from Military Commanders and Staff around the globe!

Click PRESS and MEDIA to read new coverage from military bases around the world!