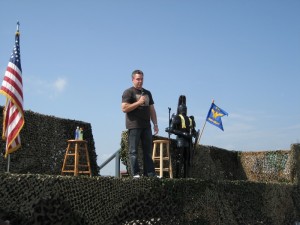 Of the military’s many incredible accomplishments and victories, one battle now requires more focus than ever: REDUCING the INCREASING rate of SUICIDES.  A ten year war involving multiple deployments by soldiers, airmen, sailor, marines, reserve and guard has created the largest number of suicides in the history of our great military. The Army and Marines have been hit hardest.  Many levels of stress, (including PTSD) combined with the challenges imposed on marriages & relationships due to deployments has created a hurdle for our troops.

“‘Really enjoyed your story. You’re doing great things for soldiers around the country!

Bernie cares deeply for our troops and has agreed to tour military installations around the world to share his personal testimony and loss of his nineteen year old brother Scott, with hope of reaching into the hearts and minds of our vulnerable and wounded warriors.  Bernie sheds light on the impact suicide has on a surviving family, as well as educating troops to detect signs of possible ideations in fellow servicemen. It takes one, to save one. Bernie is promoting Chaplains and counseling resources to empower anyone to ‘Ask for Help’ before it is too late.  Reaching out is a ‘sign of courage’, not weakness.   Resiliency to overcome…. is within all of us.

**Dozens of cases of suicidal ideations have come forward after attending this suicide prevention program.  Lives are being altered and saved!

A total of 38 soldiers either committed suicide or are suspected of doing so in July, the highest one-month tally since the Army began tracking it closely.

The Army suicide pace this year is surpassing last year, particularly among active-duty soldiers, where there is a 22% increase — 116 deaths this year vs. 95 for the same seven months last year, according to Army data released Thursday.   READ FULL ARTICLE HERE

Use the links above for more information on this powerful and effective training program.